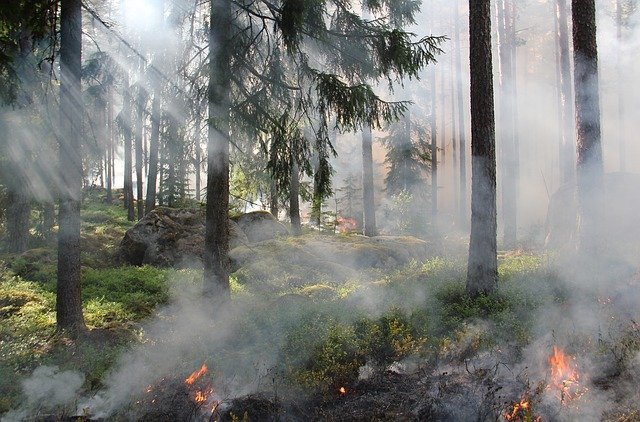 Colorado forest fires are destructive and can span for miles. Wildfires are becoming increasingly common in the Centennial State as climate change warms the planet. Rainfall has been limited in recent weeks, and a substantial portion of some counties are in the midst of extreme drought.

Forest fires in Colorado these days spread with ease, especially after multiple years of severe drought; the current dry conditions lead to a longer and more extreme wildfire season. Plus, powerful hurricane-force wind gusts, reaching speeds of up to 110 miles per hour, fan the flames.

For example, On December 30, 2021, a massive wildfire swept through Boulder and Denver. This fire is considered the most destructive in Colorado’s history, as it turned nearly 1,000 homes to a crisp singe and forced tens of thousands of homeowners to evacuate with little notice.

The cause of the devastating December 30 fire is still under investigation. Fire officials at first suspected downed power lines to be the culprit. However, this was ruled out, since the suspected power lines were used only to transmit telecommunications data, not electricity.

Hurricane-force wind gusts fanned the flames over 6,026 acres. Residential homes and commercial businesses in close proximity to the blazes were among the properties destroyed by the fire. A week after the fire, local authorities reported the first confirmed death and one missing person.

Climate change caused by human activities is one cause of the increasing number of Colorado forest fires. Forest areas that are made drier by the warming of the earth are prone to igniting after a lightning strike. Drought, too, causes dry forest conditions that are prone to sparking.

Sometimes, however, a forest or field can burn without lightning. Humans, in these cases, are likely to have caused the widespread flames. In fact, in the United States, 9 out of 10 wildfires are caused by human activity. Unfortunately, fire starters are not held accountable.

Over the last five years, Colorado has experienced 4,000 wildfires on average per year. Volunteer firefighters who respond to the scene have little investigative training—therefore, they are unable to determine why a forest or field became engulfed in flames without a lightning strike.

Lightning strikes can be detected by global satellite systems. When a global satellite network does not indicate exactly when and where lightning hit and became responsible for a forest fire, that fiery blaze will likely then be attributed to manmade activity.

Even when the cause of a forest fire is correctly determined, the data is not recorded. Volunteer firefighters, especially in rural areas, simply do not prioritize reporting. Without accurate data about how a forest fire started, preventing one becomes a daunting, if not impossible, task.

Colorado is the only U.S. state that has not appointed a fire marshal. Without a designated official, the state lacks centralized control over fire investigations, data collection, and training. Being unable to analyze data on the causes of fires, officials are limited in their ability to prevent forest fires.

The Centennial State’s 11.3 million acres are managed by the U.S. Forest Service. The forests contained within these acres are popular destinations for campers, backpackers, and hunters. Both legal and illegal activities by these recreational users have increased since the start of the Covid-19 pandemic.

Wildfire investigations are common in Colorado, more so than any state. Colorado also does not keep a list of qualified wildfire investigators. The state has six investigators who are either being trained or who are skilled to perform the job. Yet, that number is too few to make an impact.

Preventing forest fires requires that the causes of wildfires are thoroughly investigated and accurate records are kept. Resources, from trained personnel to funding and expertise, are necessary at both the state and federal levels to determine how Colorado’s forest fires start.

How do homeowners protect their property?

While pinpointing the exact causes of forest fires remains an ongoing battle, homeowners who live in fire-prone areas can take steps to protect their property. Choose Class A roofing materials, like metal, slate, or asphalt shingles, which are fire-resistant and able to withstand exposure to flames.

Seal vents and pet doors to keep out embers (embers are pieces of burning, airborne wood or vegetation that can ignite a home if it lands inside). Replace plastic skylights with double-pane, tempered glass windows that can withstand high temperatures and prevent embers from entering.

Plant shrubs and trees to create a defensible area around the home. Avoid planting vegetation within five feet of the home. Remove dead plants and tree branches regularly. Water or irrigate the lawn on a frequent basis, and use nonflammable mulch products.

Property owners must also be familiar with a local fire damage restoration company, like ServiceMaster Fire and Water Restoration. We are a crew of first-rate fire damage cleanup experts who will return your fire damaged home or business to its pre-loss condition as fast as possible.

Fire damage will destroy building materials and destabilize the property. A home’s occupants are unsafe inside a fire damaged home. ServiceMaster Fire and Water Restoration technicians arrive onsite to assess the damage and use advanced equipment and sturdy materials to stabilize the building.

Our comprehensive fire damage cleanup services include the cleaning of walls and ceilings to remove soot and smoke stains. Specialists offer pack out and content cleaning to restore damaged items, such as clothing and electronics. We also remove noxious odors using powerful deodorization methods.

Fiery blazes cause more damage than what is at first visible. Flames burn through structural materials, leaving behind potentially permanent soot and smoke damage. Soot and smoke furtively spread and tarnish or etch valuables. The damage reaches beyond areas directly affected by flames.

Due to the destructive nature of smoke and soot damage, property owners in Denver, Colorado, and the surrounding areas are advised to call ServiceMaster Fire and Water Restoration right away. Our crews are ready to respond to your emergency 24 hours a day, 365 days a year.

DO’S Call a professional. Within 72 hours corrosive byproducts can cause etching to some hard…

Parts of the American West have a reputation for being hit hard by wildfires. Currently,…

Restoring and Preventing Smoke Damage from Wildfires in Denver

The wildfire season in Denver is disastrous and highly damaging. By summer’s end, at least…

2023© ServiceMaster Fire and Water Restoration. All rights reserved. An independent business licensed to serve you by ServiceMaster Restore
Web Design by ProceedInnovative