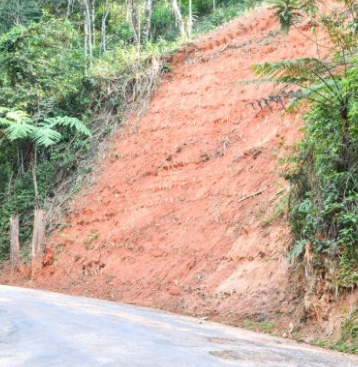 What devastations are caused by recent mudslides?

Interstate 70 in Colorado is an important highway for residents; it also serves as a key transportation route necessary to sustain the economy in the western United States. Mudslides ravaged through the highway, leaving masses of large rocks, trees, and other debris in their wakes.

Sections of the highway crumbled under 10 feet of mud. The mountainous damage was severe enough for Colorado Governor Jared Polis to issue a state of emergency. Although the precise extent of damage is unclear as of date, the highway is expected to remain closed for several weeks.

Mudslides are natural disasters that cause significant damage. Although mudslides often go unpublicized, the destruction they leave behind is immense. Approximately $1 to $2 billion in damages are caused annually by mudslides in the U.S. Mudslides in the nation kill about 25 people each year.

The Colorado mudslide that caused I-70 to shut down was so drastic that millions of federal dollars are required for repairs. Specifically, Governor Jared Polis has requested $116 million from the Federal Highway Administration’s Emergency Relief Program to finance repairs.

While Colorado mudslides are powerful enough to shut down highways, these unpredictable natural disasters compromise transportation systems in other ways, too. The Amtrak train service between Denver and Grand Junction was temporarily halted due to the destruction from recent mudslides.

The recent mudslides in Colorado, specifically Glenwood Canyon, occur as a natural outcome of the Grizzly Creek Fire of 2020. The 32,631 acre fire caused a burn scar. Consequently, the canyon has little vegetation to prevent soil erosion during heavy rains. Mudslides are the inevitable result.

Weather-related events trigger mudslides in Colorado. As previously mentioned, common causes include heavy rains, wildfires, and droughts. Earthquakes and volcanic eruptions are causes, elsewhere. People cause mudslides when they destroy the roots of vegetation that hold the soil in place along slopes.

Mudslides are dangerous because the masses of rocks, earth and debris move quickly down slopes on which natural stability is compromised. Given their abilities to travel for miles from the original source and pick up trees and buildings, mudslides are a significant threat.

What are mudslide safety practices?

Mudslides are considered a natural disaster and demand human preparedness. Surviving mudslides in Colorado requires that residents first learn the history of mudslides in the region. Mudslides often occur in the same place; so, being aware of location histories helps residents calculate their risks.

Colorado officials may order an evacuation if a mudslide is known to be particularly dangerous. Having knowledge of local emergency response plans and evacuation routes ahead of time is especially critical to avoid panicking in the midst of the disaster.

When a mudslide is about to occur, Colorado residents should evacuate immediately. If local officials, such as police, fire, or public works, are unaware of the event, notify them. While driving to the evacuation site, be alert; roads may be blocked by mudslide debris.

Listen for unusual sounds that may accompany mudslides. Rumbling sounds are produced as trees crack, boulders knock together, or debris flows downward during a mudslide. Be vigilant for signs of nearby mudslides, such as tilted trees, telephone poles, or fences.

After the mudslide, return home once officials declare it is safe to do so. Continue to be on high alert, paying attention to weather conditions, additional mudslides, or evacuation orders. Updates may be obtained via weather alerts, watching television, or listening to the local radio.

Once safely at home, inspect the property for cracks or other forms of damage caused by the mudslides. Specific areas to examine include the foundation, chimney, and surrounding land. Report any broken utility lines. Gas odors or suspected leaks should prompt an immediate call to 911.

Mudslides in Colorado can remain small or accumulate enough debris to grow large and cause massive destruction. Large mudslides can expand to be thousands of cubic feet. It is nearly impossible for individuals to outrun a mudslide, as these natural events travel at high speeds down slopes.

Due to Colorado’s steep terrain, the state is known to undergo several mudslides each year. When occurring in remote regions, monitoring the landslides is difficult. But when mudslides enter human habitat, they crash into moving traffic, damage roads, and knock down bridges.

Heavy rains can cause mudslide events. Normal July precipitation in Colorado’s Glenwood Canyon is less than two-and-a-half inches. However, in July, the area was overcome with four inches of rain within a span of five days. Whether caused by rain, drought or wildfires, mudslides are dangerous natural events.

While heavy rains cause mudslides, large amounts of precipitation can also cause flooding. When your home or business floods due to storms, call the water damage cleanup experts from ServiceMaster Fire and Water Restoration to return your property to its pre-loss condition.

Water damage of any extent is an emergency situation. Moisture is quickly absorbed into porous materials, causing a spread of destruction. Wood becomes warped or rotted, and mold grows. Protect the structural integrity of your building with the help of our skilled storm damage restoration crews.

ServiceMaster Fire and Water Restoration specialists arrive promptly to assess the extent of water damage. We develop and implement a workable water mitigation plan. Our high-tech equipment and industry-leading techniques are effective in eliminating all excess moisture from the property.

Technicians from our teams also provide content cleaning and restoration services. Salvageable goods that may be successfully restored include electronics and textiles. Our services include deodorization of the property, which is necessary when mold or moisture leave behind unpleasant odors.

Denver, Colorado, homes and businesses are susceptible to various types of water damage. No matter whether the water damage is caused by natural or manmade disasters, ServiceMaster Fire and Water Restoration is qualified to help. We stand by 24 hours a day to respond to emergency calls.

The temperature is generally stable depending on the current season, but sometimes wild things can…

What to Do When the Refrigerator Floods Your Kitchen

Refrigerators are expected to run smoothly and keep food chilled. But even this common household…

How to Protect Your Denver Area Home from Melting Snow

After long months of cold temperatures and continual snowfall, warmer weather is often seen as…